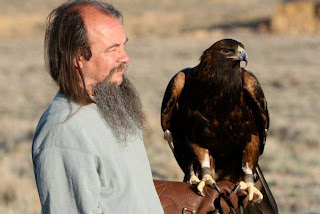 Carel is a Master Signature artist.  Masters are artists who have received five or more Awards of Excellence in the annual juried members show ART AND THE ANIMAL. Carel is know for his meticulously executed paintings that explore the rich variety of nature. Mysterious and exotic reptiles and amphibians rendered in brilliant jewel tones attest to the artist's belief that chief among nature's hallmarks is its diversity. Brest van Kempen's subjects, while untraditional, are no less threatened than those more commonly seen in wildlife art, and they are just as essential in the grand scheme of nature. Reptiles and amphibians are today's ecological equivalent of yesteryear's canaries in coal mines. Often sensitive to environmental changes, they can red-flag problems not readily apparent (currently the case with the disappearance of many species of frogs, a mystery that has baffled scientists.) 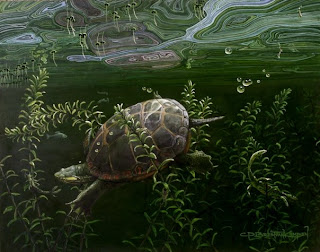 As expected, the most widespread North American typical turtle, the Painted Turtle (Chrysemys picta), is also one of the most adaptable, able to thrive in a variety of water bodies and on a variety of foods. This painting depicts the race from the eastern U. S., C. p. picta. Incidental creatures include an Eastern Newt (Notophthalmus viridescens) pond snail (Lymnaea sp.) and damselfly naiad (Enallagma sp.).

Carel's work is in many private and museum collections including the Leigh Yawkey Woodson Art Museum and Bennington Center for the Arts. There is a book on Carel's work entitled "Rigor Vitae: Life Unyielding: The Art of Carel Pieter Brest Van Kempen."


To learn more about Carel and with work please visit www.cpbrestvankempen.com