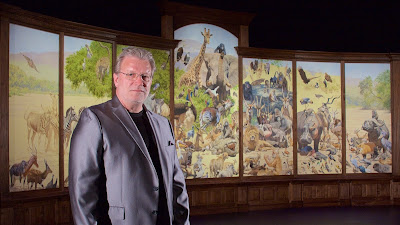 Brian Jarvi’s AFRICAN MENAGERIE is a traveling museum exhibition of epic scale, 15 years in the making.  The centerpiece of the exhibition was unveiled for a preview on September 16, 2017 at The Reif Center for the Performing Arts, in Grand Rapids, MN, near the artist's home and studio.  Over 800 people attended the standing-room-only event.

Click here for a video interview with Brian Jarvi:  https://storyboardfilmsmn.wistia.com/medias/66yk27okbu 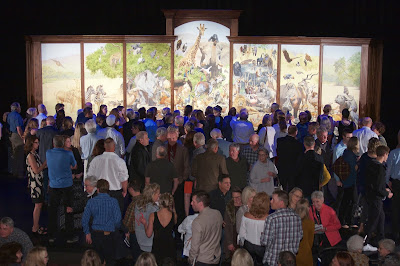 The centerpiece of Brian Jarvi’s AFRICAN MENAGERIE is comprised of seven interlocking panels, housed in rich walnut cabinetry that form a sweeping, grand panorama 32 feet wide by 14 feet high, depicting the African savannah and the animal kingdom contained therein. Over fifty related research sketches and mixed media studies (approximately half of the artist's output for the project), many of them large, surround the panorama. 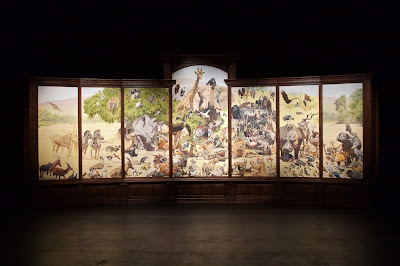 Brian Jarvi, who is an award-winning member of The Society of Animal Artists, is widely recognized among the very best painters of African wildlife today.  His concept for ”African  Menagerie" was spawned from early childhood memories and fascination with both living collections  of  wild  animals, and paintings from the  distant  past  portraying  large  varied  groups  of exotic creatures.  In  his  "Menagerie,"  the  gathering  of  an incredible   array  of  wildlife  is  set against  a  grand  panoramic  backdrop  of  the  receding  snows  atop  Mount Kilimanjaro.  All of Africa's icons including the Elephant,  Leopard, Giraffe, Rhino, Hippo, and Zebra mingle  with  such  exotics  as  Bongo,  Okapie,  and  Mandrill, which gaze directly at viewers, in a way that reveals the artist's subtext for the exhibit, namely an Inquisition of Homo sapiens and the plight of threatened and endangered wildlife species. 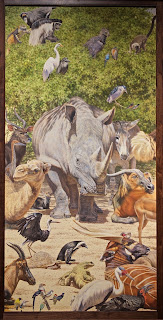 The project’s storyline was calculatingly intended to dramatize the urgency of the moment to save not  just  the  great  iconic  species  of  Africa,  but  also wildlife  across  all of our shrinkingly, diverse, environmentally-threatened planet.

In  preparation  for  the  creation  of  "African  Menagerie,"  Jarvi created more  than  100  studies  in pencil,  charcoal,  monochromatic  oils,  mixed  media  as well as  major  full-color  oils  of a  multitude  of  species, six of  which  have  been  juried  into  major  exhibitions  including  The  Annual Exhibition of the Annual Exhibition of the prestigious Society of AnimalArtists. 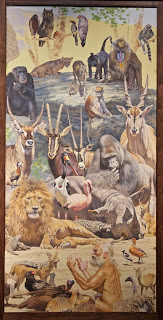 Documenting the project will be a coffee-table book by Todd Wilkinson, author of such books as Last Stand: Ted Turner's Quest to Save a Troubled Planet, and Kent Ullberg: Monuments to Nature. The book is pending publication by Rizzoli Publications, New York.
The complete exhibition of AFRICAN MENAGERIE is scheduled to premiere at The Sternberg Museum of Natural History, Fort Hays State University, KS from October 1 to December 21, 2017; and tour from  January 20 to April 5, 2018 at the Hiram Blauvelt Art Museum, Oradell, NJ in the New York City Metropolitan area; and from April 26 to July 15, 2018 to Canton Museum of Art, Canton, OH. Additional Venues are pending. 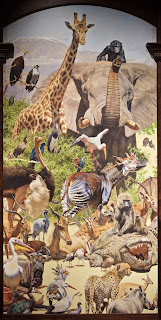 Essay on AFRICAN MENAGERIE by Todd Wilkinson
http://mahb.stanford.edu/blog/wildlife-art-rallying-cry/
Posted by JohnAgnew at 12:35 PM No comments: