Get To Know More of The SAA Board & Staff

Allen Blagden lives in Salisbury, Connecticut and has been an SAA Signature Member since 1987 and served as one of the SAA Vice-Presidents in the past. Born into a family of talented artists, he began his artistic training with his father, an artist and art teacher at Hotchkiss School in Lakeville, CT.  After graduating, Allen travelled extensively throughout Egypt and Greece whilst painting and sketching for a year.  After returning to the States he was awarded a fellowship to Yale University’s Summer Painting Program, where he studied under Bernard Chaet, and produced several large paintings based on his Egyptian sojourn.  He later graduated with a BFA from Cornell and worked as an illustrator for the National Serengeti Park in Kenya for three months, before becoming an illustrator for the Department of Ornithology at the Smithsonian Institute in Washington, DC.  After having worked there a year, he went to New Mexico to work as a cinematographer for Denny McCoy, nephew of Andrew Wyeth, for the film Billy The Kid, before returning to Connecticut to set up his own studio and paint full time.

Having won the Connecticut Art Foundation Annual Award in one of his first group shows, he also had his first solo show in New York City at the Janet Nessler Gallery, where he was awarded the Allied American Artist’s prize for Best First One Man Show of the Year!  That same year he took part in a two-man show with his father Thomas Blagden, at the Picture Gallery in Saint Gaudens National Site in Cornish, NH.  Then in 1971, he along with his wife and daughter, lived in the south of France for the winter, then lived in England and Ireland that spring and summer, where he produced a large body of paintings and drawings.  While in Europe, Allen took part in a group show at the Galerie de Paris, in Paris, France and had a solo show at Trafford Gallery in London, England.  Upon returning to the States, his entire exhibition of European work at the Frank Rehn Gallery sold out!  Allen has been in Birds In Art13 times now, and has had numerous solo exhibitions over the years with Kennedy Gallery in NYC, with his most recent being at the Hyde Collection in Glens Falls, NY in 2017.  Most recently, several of his paintings were part of the David Rockefeller auction at Christie's in NYC. 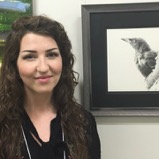 Elizabeth Nicholls lives in Toronto, Canada and has been an SAA Associate Member since 2017.  She grew up in the small town of Lindsay, in southern Ontario, and had a keen interest in art, nature, and animals for as long as she can remember. Her grandparents built a cottage in the beautiful Kawartha Highlands years ago when her mother was just an infant. Her mother adored spending her childhood there, and later shared it with Elizabeth and the rest of the family. The island cottage is still a favourite place of theirs to visit to this day, and the wildlife that inhabits the region has always been one of the main attractions. Elizabeth enjoys feeding chipmunks peanuts from her hand, watching families of raccoons come out at night to eat scraps left out for them, and loves the haunting sound of a loon. Having gone on many family trips through the forests of Ontario, Algonquin Park has been a favourite destination of the Nicholls family, where they have experienced the thrill of seeing wild moose and feeding Grey Jays from their hands. She feels very at home in the presence of nature and continues to explore on camping trips with her friends every summer.

Elizabeth’s artistic talent takes after her father Calvin, who is also a member of the Society of Animal Artists. She has always known that she wanted to make art her career, and after graduating high school, she studied at Sheridan College in the Bachelor of Applied Arts in Illustration program. She continued to advance her skills at the Academy of Realist Art, and in 2017, she felt honored when she was accepted to be a member of SAA. Now Elizabeth is enjoying the beginning of her journey as a professional artist and is overjoyed to be the new Instagram Administrator for the Society of Animal Artists. 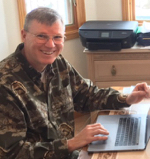 Wes Siegrist lives in Townsend, TN and has been an SAA Signature Member since 2001.  He’s one of our Distinguished Signature Members and has served as our webmaster since 2001 when he built the SAA’s first website to launch the Society into the digital age.  Wes served on the SAA Board as one of our Vice-Presidents from 2012 until 2017 when he stepped down to become the Executive Director.  He grew up playing outdoors in rural Southern Indiana and working summer jobs on farms.  The former Boy Scout still loves to hike, fish, kayak and camp and also enjoys tending to yardwork and his vegetable garden now mostly inside a greenhouse.

Wes grew up drawing, painting and working with modeling clay, and was also into building models and has continued his love of model railroading (it’s for the nieces and nephews he says) to this day. He was blessed to develop a close personal friendship with his high school art teacher as well as being able to take private art lessons for a year from a professional artist that guided him through “Drawing from the Right Side of the Brain”.  Majoring in both Fine Arts and Graphic Arts in college included drawing and painting from life and he enjoyed doing freelance illustration work, cartoons and an internship with a publishing house.

Moving to Florida began his love of creating wildlife art and it has been the primary focus of his work since the 80s.  He met me (Rachelle) in 1989 and stumbled into the enchanting world of miniature art back in 1997, now doing all of his work in this minute scale. He’s looking forward to doing BIG things with the SAA and anticipates years of fun with his fellow members!

Rachelle Siegrist for the SAA

Posted by Wes and Rachelle Siegrist at 1:33 PM No comments: