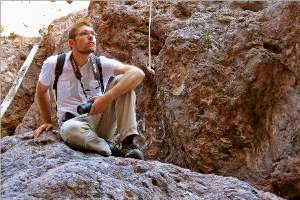 A n d r e w   D e n m a n
“In the increasingly crowded field of wildlife artists, Andrew Denman [b. 1978], stands out for his distinctive look in addition to his masterful painting skill” writes veteran art writer and magazine editor Jennifer King in an editorial for Create Better Paintings.com.

Denman is an artist known for capturing diverse subjects, from wildlife, to landscape, to still life, in an equally diverse range of styles.  His recent work focuses on intimate wildlife portraits and scenes approached with a unique combination of hyper-realism, stylization, and abstraction.  While Denman does not eschew the term “wildlife artist”, his work has moved well beyond the genre, often incorporating modern art elements as well as subject matter that most traditional wildlife artists avoid.
Denman holds a BA in Fine Arts from Saint Mary’s College in Moraga, CA.  He is well known in the San Francisco Bay Area as both an artist and teacher, and he has gained national attention through major gallery showings, numerous museum exhibitions, artist workshops and speaking engagements, and feature coverage in such publications as Southwest Art, American Artist, Wildlife Art, and The Artist’s Magazine, among others.
Born in 1978, the Bay Area native showed a great degree of interest in art from an early age.  Denman organized his first one man show in high school at a local library, and soon after began participating in exhibitions with Pacific Wildlife Galleries in Lafayette, CA.  Since then, Denman has held four highly successful one-man shows at Pacific Wildlife. Locally, he has also participated in exhibits at the Bedford and Hearst Galleries, The Lindsay Wildlife Museum, the Oakland Museum of California, and the Bakersfield Museum of Fine Art.


Typical of his mature style, Denman uses the flamingos, as they shift musically between styles and stages of completion, as a vehicle for exploring the paint itself and the process of painting.


Whether painting an animal in its natural habitat or juxtaposing it against an abstract background,

Denman goes to great lengths to faithfully portray his subjects, taking frequent field trips to nature areas, parks, and zoos to observe his subjects and acquire reference material.  Yet while accuracy is always of great importance, Denman is an artist before he is a naturalist.  The sense of fearless experimentation and originality he brings to his paintings testifies to the artist’s true focus.  As Mary Nelson wrote in the Wildlife Art magazine, “In the end, it’s not the mood, the meaning, or the method that Denman craves.  It is the medium-art.”

Mine
by Andrew Denman

I drink jubilations of ignorant green;
I lap the clear quiet of blue;
I’m absorbed by the wisdom of yellow
And the violet mystery, too.

Mine is the hot, earthy passion of red
And orange with its zeal and its rage;
Mine is the vibrance and glory of black
And the pure, peerless white of the page.

It is my red lace eyelids that purple the sun;
In my brain burns the brilliance of sight;
Mine to breathe are the white buds of jasmine,
Unfurling like stars in the night.

I claim azure oceans that tug at my feet;
Mine as well are the sweet singing reeds;
Mine is the moss and the dust and the dross
And the root and the stem and the seed.

Mine
Posted by JohnAgnew at 10:58 AM No comments: