Art and the Animal 50th wrap-up! 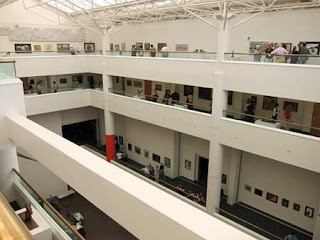 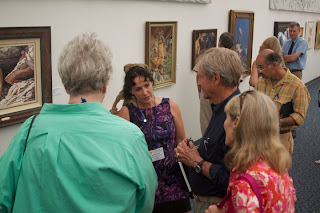 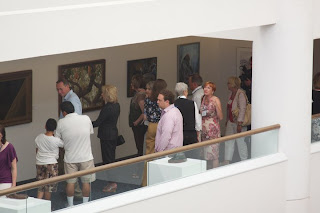 For the almost two hundred artists, guests and patrons in attendance, it was definitely four days to remember! If anyone got bored at the event, it certainly wasn’t the fault of our President, Diane Mason or her husband Bob, our Executive Director. They found a beautiful place for all of us to stay and arranged three days of wonderful animal watching opportunities, topped off by the annual banquet and award presentations. 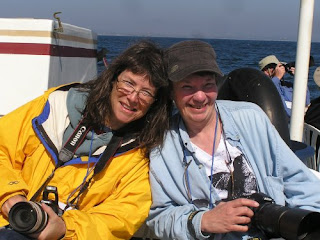 Artists Julie Bender and Mary Cornish
First on the schedule was whale watching. Two boats filled with animal artists set out on Wednesday morning in typical sunny Southern California weather. Before we were even out into the Pacific Ocean, a large group of California sea lions were spotted lounging on a floating dock. As we were sailing through open water, we suddenly found ourselves in the midst of a large pod of bottle-nosed dolphins who really put on a show, sometimes cruising right alongside the boat. As we went on, there was occasional excitement as someone spotted a bird that they had never seen before. A sunfish, or mola, was also a rare and unusual sighting.
Upon reaching our destination for the day, some small islands, the captain told us to be on the lookout for whales. In the meantime, we saw and were able to photograph sea lions, harbor seals, brown pelicans, brown boobies, blue-footed boobies, cormorants, gulls and terns. But only a few people on one boat caught a glimpse of a whale. No matter. We all had a wonderful time!

On Thursday morning, buses took everyone out to the San Diego Zoo Wild Animal Park (recently re-named the San Diego Zoo Safari Park), which was founded many years ago as a breeding facility for endangered species, but has since grown into a great public attraction. Many of us took the tram bus tour, which gave us an overview of large paddocks that are home to cheetahs, African elephants, gemsbok, roan antelope, sable antelope, addax and Rothschild giraffes, among others. The rest of the park was very walkable and contained a wide variety of mammals and birds, including all the big cats and a number of species of eagles.

The world famous San Diego Zoo in Balboa Park was the last, but absolutely not least, animal activity. We arrived in the morning and everyone fanned out to cover as much as they could of this world-class facility, which includes a number of aviaries and open ponds for birds, in addition to the mammal enclosures, reptile collection and children’s zoo. As always, the pandas drew a constant stream of delighted visitors, especially since there is currently a youngster in residence. At the end of the day we all gathered for a lovely outdoor buffet dinner right in the zoo. 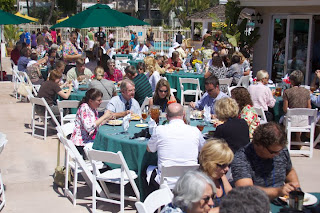 Saturday morning began with a continental breakfast at the hotel, followed by the annual membership meeting. The highlight of the morning was a talk by Robert Bateman, who showed us images from his new book and spoke about his art. After lunch came the opportunity we had all been waiting for, viewing the 50th Anniversary edition of “Art and the Animal” at the San Diego Natural History Museum. The show had been installed on three levels of the central atrium, filling the walls, corners and, seemingly, every nook and cranny in between. Many favorable comments were overheard by visitors from the public. The artists felt great pride in seeing, and being a part of, a show that represents the very best animal art being created today. 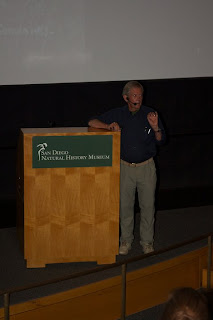 Toward the end of the afternoon, Robert Bateman once again gave a presentation, this one open to the public, as part of a new lecture series the museum has started on children and nature. Saturday evening saw us gathering in a large ballroom for the final event of the week, a banquet and the presentation of awards by a excellent panel of jurors selected by the Natural History Museum. President Diane Mason was presented with a plaque of appreciation by the board of directors of the Society for her outstanding work as President. Robert Bateman was honored with the Society’s first ever Lifetime Achievement Award for his distinguished career both as an artist and advocate for environmental and conservation causes. 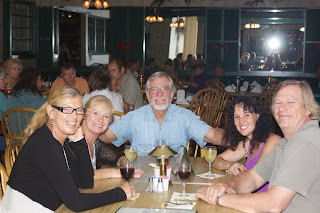 As the event wound down, members collected the last signatures for their show catalogs, talked shop or simply chatted together, not wanting the evening to end. The attendees ranged from nationally and internationally known artists of great and varied accomplishment to artists who had been members of the Society for less than a year. But we were all colleagues who had come together for the 50th Anniversary celebration, sharing our love of animals and our appreciation for the privilege of being able to create art with them as our subjects.
See you all next year!
Susan Fox
See more photos of the event on the SAA's facebook page!
(rc)
Posted by Robert Louis Caldwell at 2:33 PM No comments:

Two Members of the SAA ‘Family’ are gone

It is with a heavy heart and much sadness that I inform everyone about the recent passing of two Society of Animal Artists family members.

Marijane Singer, long-time Patron member and Director of the Hiram Blauvelt Art Museum in Oradell, NJ, passed away this past Sunday, September 12, 2010.

Long-time Signature member Robert Salo also passed away suddenly and unexpectedly on September 13, 2010. He lived and breathed the SAA, and was responsible for the SAA Art and the Animal tour coming to Estes Park, CO in 2008. His wife, Jeanne, asks that any memorial contributions in his name be made to the Society of Animal Artists. What a wonderful tribute to his spirit and his devotion to our organization! 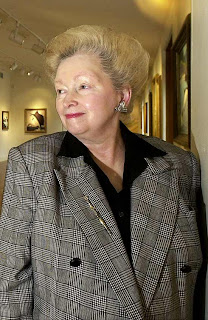 Marijane Singer, a cultural and civic volunteer who was director of the Hiram Blauvelt Art Museum in Oradell, a showcase for wildlife art, died Sunday. She was 80. 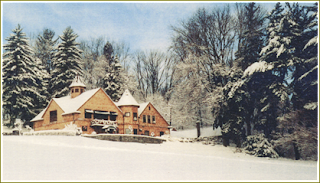 "We're known internationally but we aren't known locally," Mrs. Singer said in a 2008 interview with The Record, referring to the museum lodged in an 1893 carriage house on the former Blauvelt estate overlooking Kinderkamack Road. "If you aren't into wildlife art, you probably never heard of us."

But wildlife artists heard of Mrs. Singer. She became the museum's director about 25 years ago, after she joined the board of the Blauvelt-Demarest Foundation, a legacy of the philanthropist Hiram Blauvelt. Guy Coheleach, whose work is currently exhibited at the Blauvelt, said Mrs. Singer raised the profile of the museum, one of a handful in the United States dedicated to wildlife art.

"She was influential in getting the Society of Animal Artists, the largest and most proficient group of wildlife artists, to have their annual show at the Blauvelt a couple of times," said Coheleach, of Hobe Sound, Fla. (Read more)

Robert (Bob) Salo's love of nature and wildlife began early. As a boy growing up in Michigan's remote Keweenaw peninsula, Bob spent hours studying and drawing the animals, farms, and forests of that spectacular region. 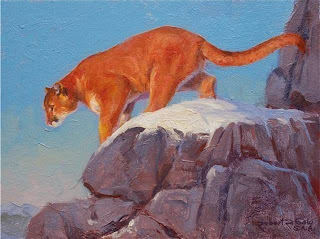 Following a tour of duty in the U.S. Army, Bob received his first formal art instruction at Meinzinger Art School in Detroit, where he studied under George Rich.

While working for many years as a commercial artist and fine arts illustrator in Detroit and Boston, Bob continued to celebrate his love of nature through wildlife and landscape painting in his free time.

Bob fulfilled a lifelong dream when he moved to the outskirts of Colorado's Rocky Mountain National Park. In Colorado he perfected his painting skills, devoting his full time to capturing that area's wildlife and scenery on canvas. His work in Boston introduced him to New England's rural charm and seaside beauty.

Bob Salo's paintings can be found in galleries and museums, as well as in private and corporate collections in the United States and abroad. He is a signature artist member of the Society of Animal Artists [SAA], and has been exhibited in the prestigious national tour ARTS for the PARKS numerous times.

Bob's wife Jeanne has requested that in lieu of flowers, memorial contributions be made to the Society of Animal Artists, as that was so near-and-dear to Bob's heart. As a member of SAA for nearly 30 years, that is an honor he well deserves.

Art and the Animal opens today! 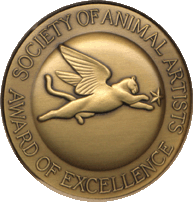 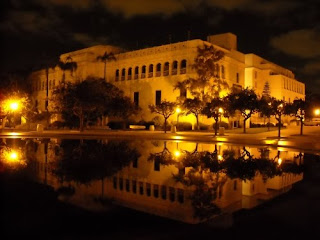 The Society of Animal Artists' 50th Annual Art and the Animal exhibition opens today at the San Diego Natural History Museum in San Diego Califorinia. This is the society's 50th annual exhibition of the world's best wildlife artists. The jury this year had the overwhelming task of selecting from 434 submissions by 256 artists.

Art and the Animal exhibition

PREMIERE:
San Diego Natural History Museum, San Diego, CA
September 4 - October 31, 2010
A Gala Artist's Reception, open to the public, will be held at the museum on the afternoon of Saturday, September 4, 2010.


We hope that you can make it to one of these venues to see this amazing exhibit!

For more information, visit www.societyofaniamlartists.com. You can also find us on Facebook.

Posted by Robert Louis Caldwell at 9:42 AM No comments: