"Where do you get your inspiration?" by Terry Miller


"Where do you get your inspiration?"

Artists can be asked that question ten times a day - twenty on a good day! The who, the why, the what, the where . . . for me personally, I find inspiration in all sorts of places and through all sorts of visual goodies and cues. Maybe surprising to some, since I am a rather monochromatic guy - working in shades of black, white and grey - I often find much to be inspired by in the more colorful works of artist friends and sometimes in wonderful discoveries of artists I had not previously been familiar with.
Leaving myself open to those sorts of discoveries wherever they may pop up, I first came across the work of late nineteenth century Norwegian, Frits Thaulow, through a posting of one of his paintings on someone's Facebook page back at the close of 2012. I was immediately struck by the beauty of the composition - well planned, well executed - and the masterful handling of all the elements of the painting. Now why, might you question, would a guy who works in graphite be so - pardon the pun - drawn to such a colorful work? Just because my work is in black and white does not mean that I cannot learn from observing the way a colorist makes use of value and shape and line and texture, all those key elements of a well designed and composed work of art.
As I spent time exploring a larger body of work of this marvelous new-to-me artist, I realized that the work posted on Facebook was certainly not a one-off, a single 'hit', but part of a vast sea of brilliantly executed, very lucid and evocative paintings that spoke volumes to me about Thaulow's ability to pull me into his compositions and make me want to stay forever. As an artist myself, that is the sort of end result I strive for in my work - not every single piece that comes off my drawing board, but maybe every fifth or sixth or seventh piece?
For a rather long period of time after I turned professional as an artist twenty five years ago, I never delved into water in my compositions; it was a texture I felt fearful of attempting in my drawings. I've talked to many other artists who also felt, and still do to some extent, that water is a difficult surface texture to portray in a two dimensional work of art. After looking at dozens and dozens of paintings in which Thaulow really focused on water as the major subject of those works, I was awed by the simplicity of his renderings, yet how liquid, transparent and filled with movement his waterways were.
For the sake of brevity and knowing that I could key into and throw a spotlight upon many aspects of Thaulow's choices of subject matter - his pure landscapes, brilliant in my estimation and the equal of any of the more well known tonalists of the time -  I'll concentrate here on the way he depicted and focused upon water in a staring roll.
The examples below are just a tiny slice of Thaulow's world of water; some depicting its calm, some depicting more of a rush, some focused on watery reflections both in daylight and at night - water in all its seasons. What has struck me the most is the simplicity of his brush work and how fluid the paint seemed to be when applied in broad strokes, not unlike Monet in his grand water lily canvases. In the first image, that marvelous, bright yellow and gold rippling water with splashes of green and mauve, the water shimmers and glows. A detail of part of the water shows bold, impressionistic brush work. 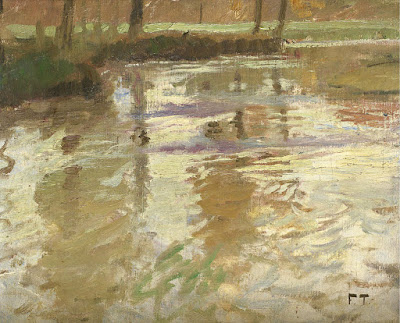 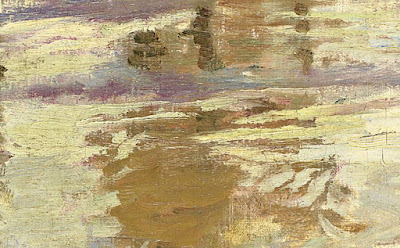 The second full painting followed by another detail, shows the way Thaulow mixed in all sorts of hues to depict the reflection and general swirling character of the water, and the third pairing - the winter scene with another detail following it - shows little scuff marks depicting subtle movement in the otherwise rather still water. 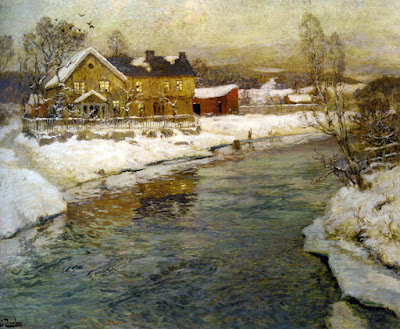 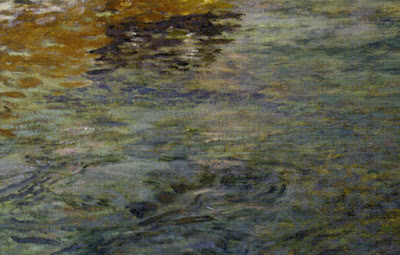 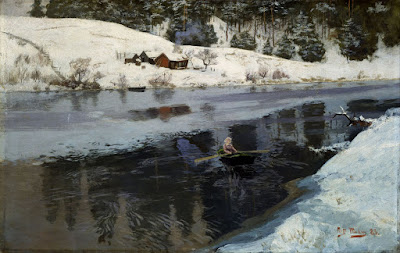 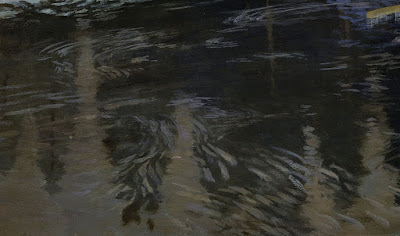 Five more examples of his vast output of water study follow, showing the diversity of his rendering of that single element of design and his mastery of it. Studying such artistry has certainly offered me ideas and insight and, even as an artist who focuses more on other aspects of nature and the animal realm, there is much here that speaks to me and that will inevitably cause me to approach future works on my drawing board in ways I may not have before I was inspired by the works of Frits Thaulow. 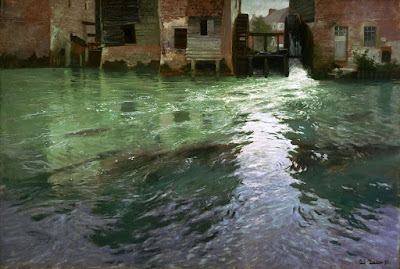 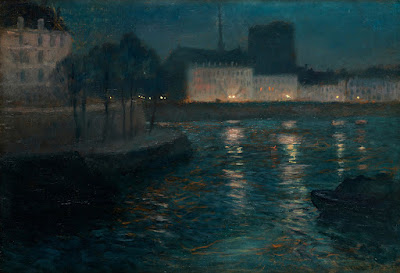 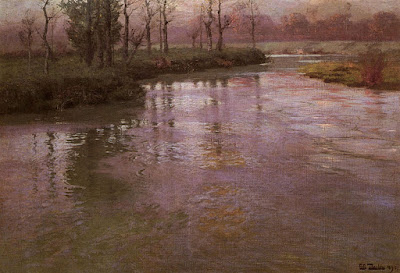 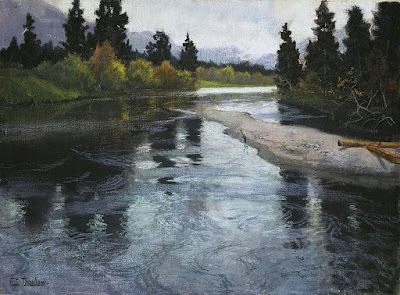 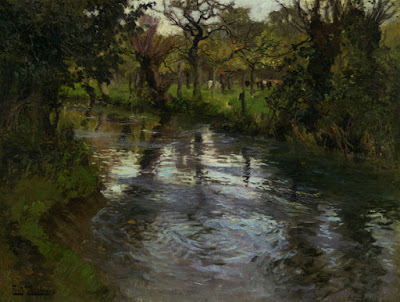 Terry Miller is a graphite artist residing in Maryland, USA. He is a signature member of the Society of Animal Artists and on their Board of Directors.
http://www.terrymillerstudio.com/
Posted by JohnAgnew at 10:09 AM 1 comment: