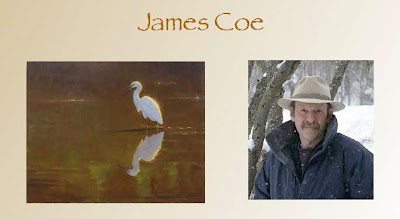 Growing up in the suburbs of New York City, he was fascinated early on by the egrets and shorebirds he noticed in nearby salt marshes, and he taught himself to identify the birds he spotted around town. He began to paint as a teen when he and a friend set out to compile a guide to the local birds.

Jim went on to Harvard, where he earned a degree in biology (with the goal of becoming an ornithologist), but received little formal training in art until he attended Parson's School of Design in New York as a graduate student.

Immediately after earning his master's degree at Parson's Jim shifted gears and immersed himself in the art of field guide illustration. He contributed work to several books, including the recently reissued Easy Bird Guide: West, and Birds of New Guinea, and to Frank Gill's classic college textbook Ornithology. But he is best known as the author and illustrator of the acclaimed Golden Field Guide Eastern Birds, first published in 1994, and reissued in 2001 by St. Martin's Press.

Finally, after more than fifteen years of painting nothing but bird identification plates, each carefully rendered in watercolor and gouache, Jim stepped back across the divide into the world of 'fine' art, and he turned his attention to painting landscapes in plein air. He found that many of the skills needed to capture the fleeting light and dynamic conditions of the landscape are analogous to those he had previously developed for sketching an active bird as it foraged or preened. Both rely on careful observation, practiced visual memory, speed, and instinct. But the vigor and physical energy that it takes to dash a quick field study in oil paints were new to Jim's work at that time, and they clearly helped shape his approach to painting.

James was Leigh Yawkey Woodson Art Museum's prestigious "Birds in Art" 2011 32nd Master Wildlife Artist. Jim also shows in most of the annual exhibitions hosted by the Bennington Center for the Arts; in 2009 he was the grand prize winner of their inaugural Laumeister Fine Art Competition. And in the fall of 2011, his membership status with the prestigious Oil Painters of America was promoted to Signature Member.