SAA and the Ward Museum 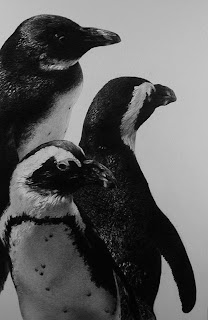 Wildlife artists from across the country are joining the prestigious Ward WorldChampionship and Art Festival to kick off the season in Ocean City, MD. The Society of Animal Artists offers a Member Show and Sale April 27-29, 2012 at the Roland E. Powell Convention Center. With over thirty artists presenting works in a variety of media, including bronze, painting, etching and more, the SAA Member Show and Sale will have something for all visitors who are art and nature enthusiasts.

Terry Miller, graphite artist, Takoma Park MD will be showing his work “Cold Shoulder” during the SAA Member Show and Sale. The piece features penguins that are part of the large contingent of African Penguins that reside at the Maryland Zoo in Baltimore. Miller explains their appeal, “they simply lend themselves to my medium of graphite with their sharp contrasts of black and white.”
Bryce Pettit, bronze artist from Monticello, Utah is another of the SAA artists showing his work. His sculpture “To and Fro” presents swallows resting on feather tips alone. Their own graceful lines express the beauty of the wildfowl and their movement. These and over 80 other works will be available for purchase during the weekend event.

The SAA Member Show and Sale is part of the 42nd Annual Ward World Championship Wildfowl Carving Competition and Art Festival. More than 1200 bird carvings are entered and on display at the world’s premier wildfowl carving competition. Carvers of all skill levels, from youth carvers to world champions, compete against their peers for top honors. The event features an educational conference, children’s activities, and art exhibitors and vendors. The live Ward World Class Art and Carving Benefit Auction is held on Saturday, April 28 from 3-5pm, featuring chance to bid on fine antiques, contemporary carvings, sculptures, paintings, prints, and publications by well-known artists in a wide variety of styles.

The SAA Member Show and Sale is joining two other new event features at 2012 Ward World Championship: the Delmarva DockDogs, a dock diving and distance jumping canine performances in a huge 40-foot pool, and a demonstration of the ancient art of falconry by SkyHunters in Flight. Your general admission ticket to the event includes these special programs and more. Tickets can be purchased in advance at the Ward Museum of Wildfowl Art, Salisbury University or in person during the event at the Roland E. Powell Convention Center.

The Society of Animal Artists is an association of animal and wildlife painters and sculptors. Founded in 1960, the Society is devoted to promoting excellence in the portrayal of the creatures sharing our planet, and to the education of the public through its informative art seminars, lectures and teaching demonstrations. Some of the finest animal artists from the United States, Canada, Europe, Africa, Japan, and Australia are represented in the Society's membership. For more information visit www.societyofanimalartists.com.