Biodiversity in the art of...


BIODIVERSITY IN THE ART OF
CAREL PIETER BREST van KEMPEN 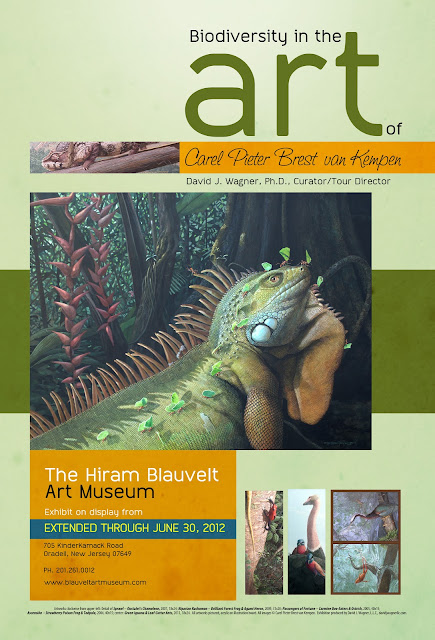 The Hiram Blauvelt Art Museum has extended its display of BIODIVERSITY IN THE ART OF CAREL PIETER BREST van KEMPEN through June 30, 2012.  The exhibit was originally scheduled to close there on March 31, 2012.  Motivating the Blauvelt were several tour groups which will be traveling to the Blauvelt to view the exhibit in April and May.  Of the extension, David J. Wagner said, "The last exhibits I produced that were extended by popular demand and special requests from major venues were The Art of Robert Bateman at the McMichael Canadian Art Museum near Toronto, and Kent Ullberg: A Retrospective at The Joslyn Art Museum in Omaha."  "I am totally ecstatic and so happy for Carel, since the Blauvelt now has not only premiered his body-of-work on the East Coast, but also validated its success with a huge exclamation point!"

The Hiram Blauvelt Art Museum serves New Jersey and the greater metropolitan area of New York City.  BIODIVERSITY IN THE ART OF CAREL PIETER BREST van KEMPEN was previously displayed at The Arizona-Sonora Desert Museum in Tucson, AZ; The Wildlife Experience (museum) in Denver, CO; and The Wildling Art Museum near Santa Barbara, CA.
Carel Pieter Brest van Kempen is a painter of Dutch descent, who explores the rich diversity of the natural world from exceptionally unique perspectives.  The artist’s self-stated goal is to say as much as he can about how organisms live and interact with other organisms and their environments.  Brest van Kempen, who is also interested in prehistoric subject matter, paints from first-hand experience and knowledge.  He has traveled across and Central and , and studied both threatened and extinct species and their ecosystems in detail.

Since he was a child, Brest van Kempen has always been a student of nature.  He spent his youth exploring untracked back country along the of the ; drawing, studying, and collecting native flora and fauna.  As a boy, Brest van Kempen practiced falconry and bred lizards.  He began drawing wildlife when he was only three years old and created his first painting at the age of twelve.  At the , his studies focused on biology, which he hoped to teach, and field work.  By 1988, his interests in art and nature matured to the point where he could pursue a full-time career of painting.  Though Brest van Kempen is among the most highly accomplished technicians in the entire art world, and among the most creative, he is essentially self-taught.  Brest van Kempen paints in a highly realistic manner.  Unique in the world of wildlife art, Brest van Kempen’s approach is reminiscent of the art of Salvador Dali, which has always fascinated him. There is no other wildlife artist who paints like Carel Pieter Brest van Kempen; his approach and style is truly unique.

Carel Pieter Brest van Kempen has exhibited his works throughout the world and earned numerous awards.  He is a member of the prestigious Society of Animal Artists which has awarded him awards on multiple occasions, including their highest honor, the Award of Excellence, in 1994, 1996, 1997, 2004, and 2010. Public collections containing his works include the Arizona-Sonora Desert Museum, the , the , The World Center for Birds of Prey, and ’s for the Arts.

A book entitled, Rigor Vitae: Life Unyielding—The Art of Carel Pieter Brest van Kempen, which was written by the artist, and which includes a Foreword by Belgian painter, Carl Brenders, and an Introduction by Curator, Dr. David J. Wagner, was published by Eagle Mountain Publishing and is available at Eagle Mountain Publishing at (801) 789-4149 or empub@msn.com.
BIODIVERSITY IN THE ART OF CAREL PIETER BREST van KEMPEN is produced by David J. Wagner, L.L.C.