With over 20 years as an artist, naturalist and author, Carel Pieter Brest van Kempen's artistic mission has always been to deepen awareness of the natural world and how it functions. His work has been exhibited worldwide in such venues as The Smithsonian, The British Museum and The National Museum of Taiwan. He has been named one of 100 “Most Honored Artists of Utah” by the Springville Art Museum (2002) and one of 14 “Master Signature Members” of the Society of Animal Artists (2008). He has illustrated over a dozen books, including Dinosaurs of Utah (1998), Biology of the Gila Monsters and Beaded Lizards (2005), Biology of the Boas and Pythons (2007), Urban Herpetology (2008), and Conservation of Mesoamerican Amphibians and Reptiles (2010) and authored the popular coffee-table book, Rigor Vitae: Life Unyielding (2006). In addition to painting, he actively writes and blogs about natural history and conservation themes. 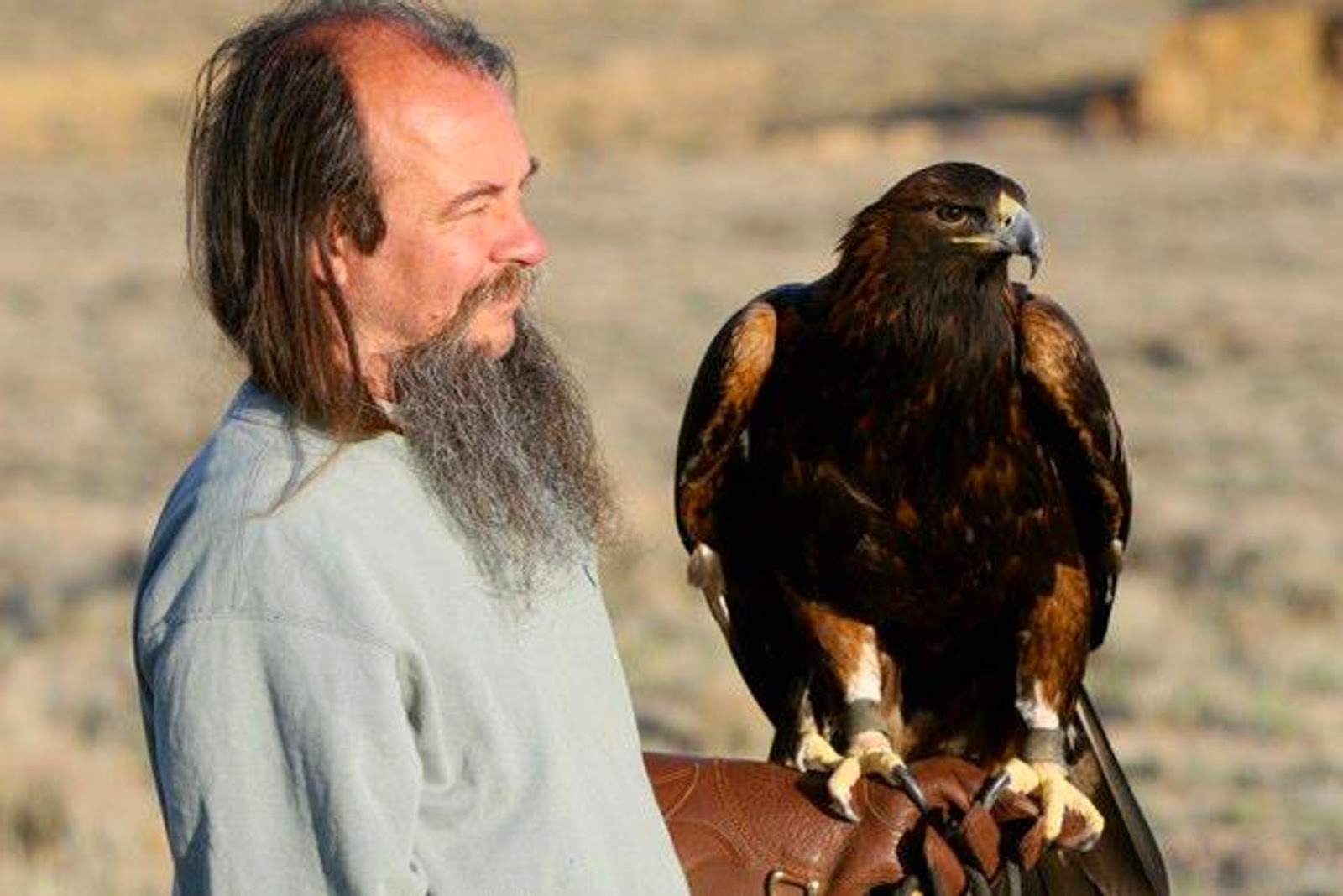 The world is filled with artists who aspire to faithfully render nature into art.  But they are either misguided or deluded.  An artist cannot transcribe what he sees in nature into art; he can only translate it through his medium.  As the eminent aesthetician, Ernst H. Gombrich wrote, “ . . . the correct portrait, like the useful map, is an end product on a long road through scheme and correction.  It is not a faithful record of a visual experience but the faithful construction of a relational model.”

Several other insights of Gombrich set the stage for this exhibition.  Of conception and perception, Gombrich wrote, “ . . . all art originates in the human mind, in our reactions to the world rather than in the visible world itself, and it is precisely because all art is ‘conceptual’ that all representations are recognizable by their style.”  Of style, Gombrich said, “Styles, like languages, differ in the sequence of articulation and in the number of questions they allow the artist to ask; and so complex is the information that reaches us from the visible world that no picture will ever embody it all.  That is not due to the subjectivity of vision but to its richness.” 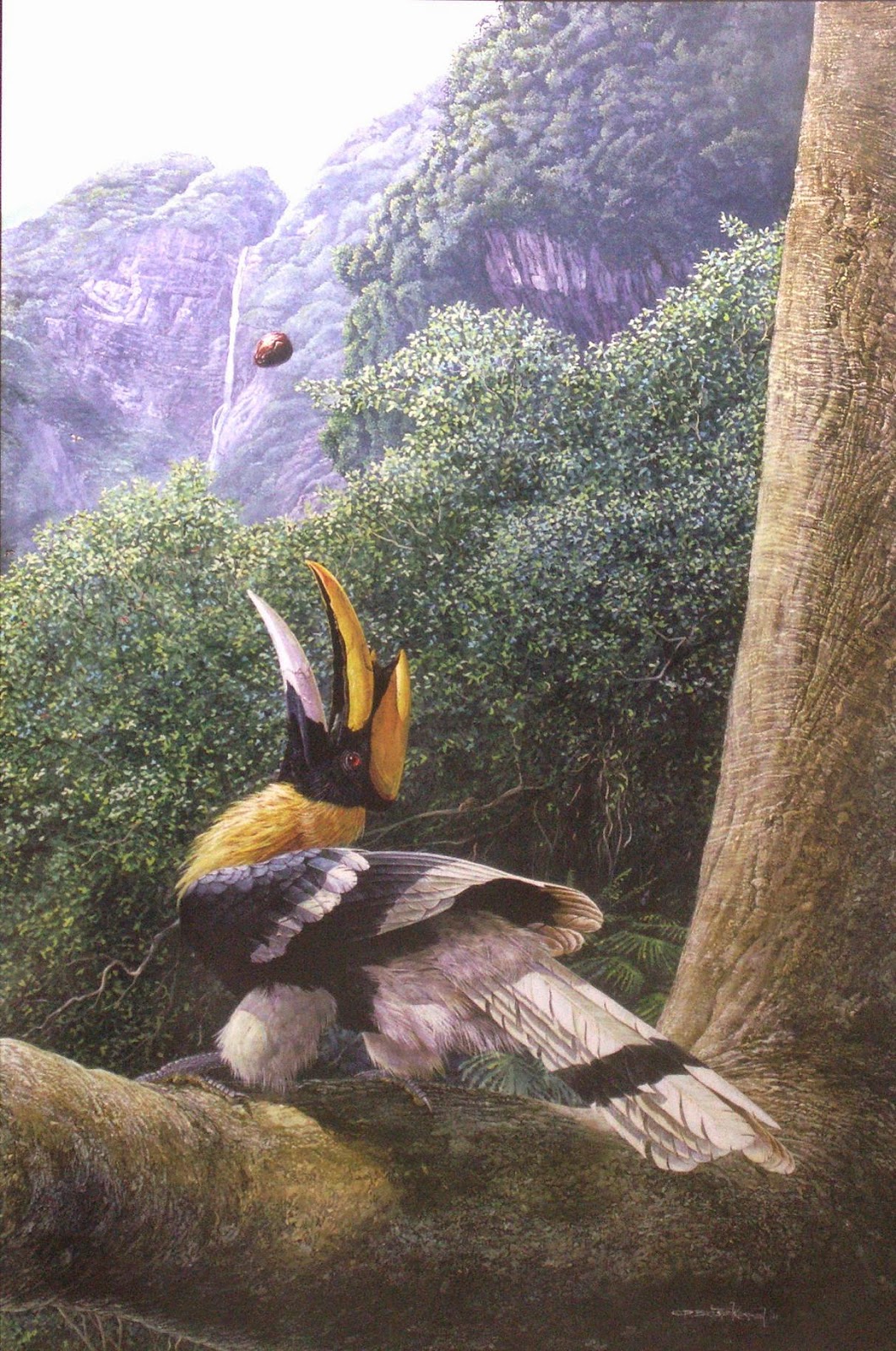 Because Brest van Kempen is a thinker at heart, he begins his creative process where he should, at the beginning, by using his imagination to conceptualize a painting before he ever puts pencil to paper.  To transform his concept into composition and design, he works his ideas out through preliminary sketches.  After he is satisfied with his concept and design, only then does he embark on the final painting.  Throughout the process, Brest van Kempen employs a rich vocabulary of principles, to arrange elements in ways that give him his own distinctive, individual style.  In composition and design, elements (e.g., color, value, line, texture, shape, and space) are like building blocks, while principles (e.g., balance, dominance, economy, emphasis, variety, gradation, movement, harmony, rhythm, proportion, space, variety) are like tools that artists use to assemble elements.  Whereas the number of elements and principles in art is constant, the number of ways to combine them is infinite.  This is important because it permits individual painters to express themselves in their own style.  Brest van Kempen typically achieves his style by emphasizing elements such as line, color, space, and point of view. 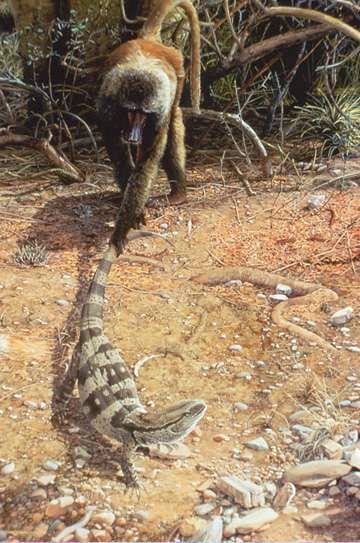 Because Brest van Kempen works from nature, and nature is a miracle of infinite proportion, another important part of Brest van Kempen’s process is a constant push for new knowledge.  About the ecology of his paintings, Brest van Kempen has said, “I'm really interested in what animals look like, but I'm much more fascinated by the way that appearance functions as those animals interact with one another and with their environment.  Ecology is the motivating force not only of evolution, but of my artwork.”
Brest van Kempen’s reaction to the world around him, rather than a desire to faithfully render nature into art, and his ability to embody his imaginative concepts through well-honed technique, are hallmarks of his paintings.

Whereas these hallmarks are a giveaway for personality characteristics such as an unquenchable imagination and an insatiable need to know and understand nature, the degree to which Brest van Kempen relies on sheer talent versus tenacious hard work, is less clear.  His art seems so effortless, but its richness and depth makes one wonder just how effortless it is.

In addition to imagination, there is something else about his paintings that elevates them a cut above the rest.  What could that be?  I think it is the pure and simple joy that comes from relishing the work that he does as an imaginative wildlife artist.  In each of his paintings, there is an undercurrent of joy.  Often this can be seen in the subjects he selects.  Brest van Kempen’s subjects do not often include cliché glamour species like those painted ad infinitum by other artists; rather, they comprise under-represented species which give real meaning to the term, biodiversity.  To make my point, here are but a few titles from Brest van Kempen exhibitions that I have had the privilege to curate: Bat Falcon & Golden Free-tailed Bat, Meller’s Chameleon & Leaf-toed Gecko, Gripping Tail__Yellow Baboon & White-Throated Monitor, Hippopotamus & Nile Softshell Turtles, Manned Wolves & Three-banded Armadillo, Reticulated Python and Masked Finfoot, and his masterful triptych, Convoy Through the Canopy__de Brazza’s Monkeys.  Such titles would make any wildlife art aficionado smile.  They also underscore my point, which is, no other wildlife artist that I know, consistently takes the kinds of creative risks that Brest van Kempen takes in his selection of subjects and activities. 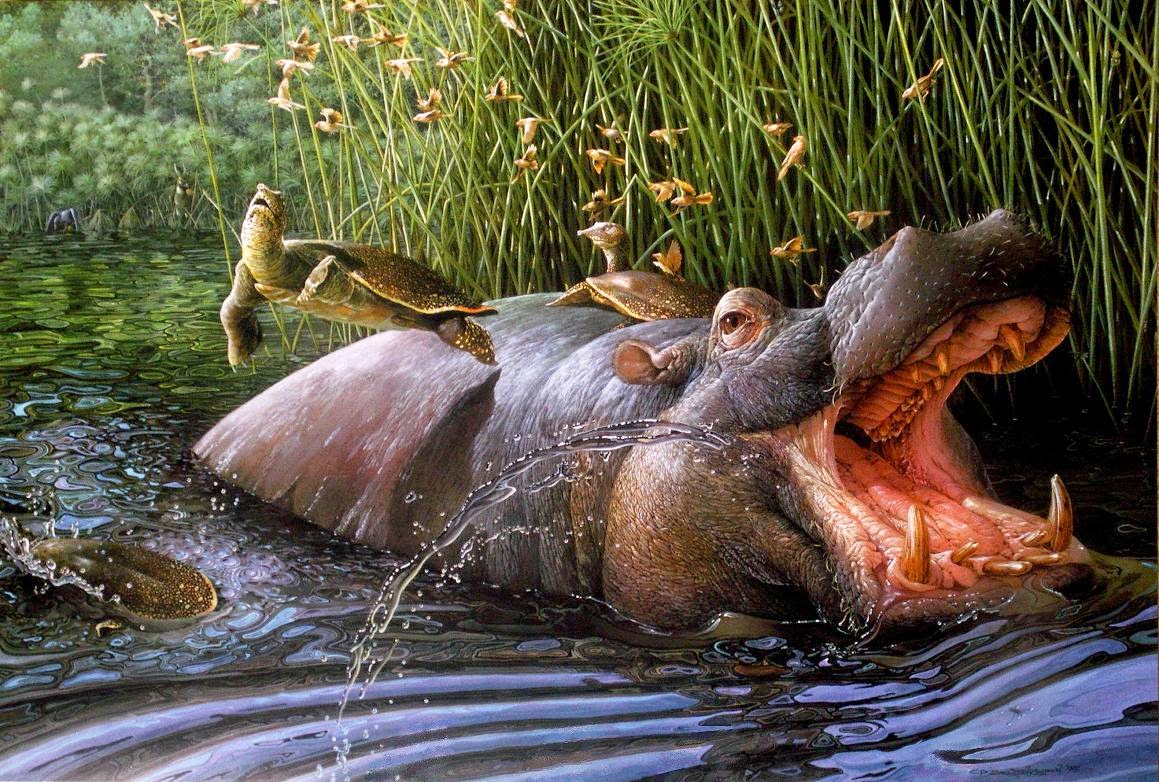 Another manifestation of joy in the paintings of Brest van Kempen is the relationship in which he places the viewer to his subjects, or, in other words, perspective.  I can think of no wildlife artist who has produced a body of work that consistently affords viewers with richer perspectives than Carel Pieter Brest van Kempen.  His creative and engaging perspective is yet another hallmark of his unique style. 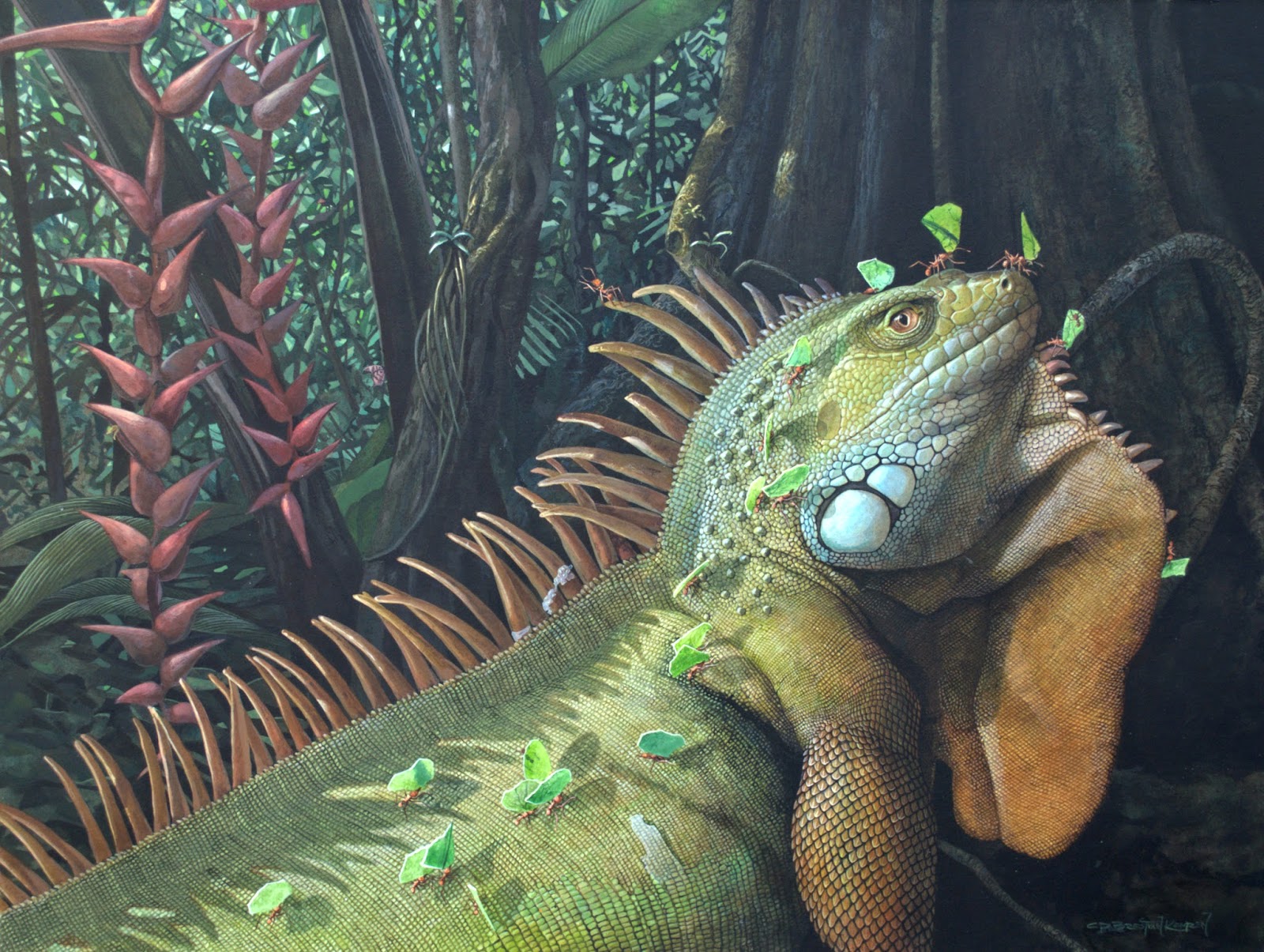 Brest van Kempen’s perspective, combined with his virtuosic technique and tantalizing imagination, give his paintings a richness and depth that is rare in the world of wildlife art.  For aestheticians or art historians like me, these characteristics are critical for assessing art.  Depth, after all, is what keeps viewers coming back and interested in more.  Richness and depth are the secrets to great art.  They are what makes art endure.

It is a pleasure to work with an artist the caliber of Carel Pieter Brest van Kempen and to serve as Curator/Tour Director of his exhibition, BIODIVERSITY IN WILDLIFE ART.  PAINTINGS BY CAREL PIETER BREST van KEMPEN have been and continue to be enjoyed at important venues nationwide, among them, The Wildling Art Museum in Santa Barbara, The Wildlife Experience in Denver, and The Arizona-Sonora Desert Museum in Tucson.


REFERENCE: E.H. Gombrich, Art and Illusion, A Study in the Psychology of Pictorial Representation, Princeton University Press, 1960.
Posted by JohnAgnew at 10:16 AM