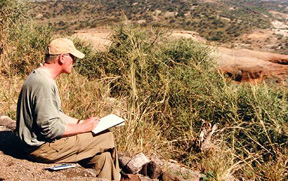 During his years as a professional artist, Terry has garnered major awards and has had his work added to private and corporate collections both here and in Europe, toured internationally in such well reputed exhibitions as ‘Birds in Art’ and the Society of Animal Artists.

One of Terry's recent pieces!

In the summer of 2008, the Woodson Art Museum in Wisconsin hosted a solo exhibition of Terry's works under the title, 'Unknown Bridges'. That exhibition, comprised of 40 works, spotlighted the abstract nature of bridge structure juxtaposed with the softer, natural feel of the animal world. A companion book of the works included in that series was published in conjunction with the opening of the exhibition. And in the fall of 2009, 'Strokes of Genius 2: The Best of Drawing Light and Shadow', was published by North Light Books and includes five of Terry's drawings among the works of the featured 100 artists.