A retrospective exhibit of Stanely Meltzoff’s largest body of original work will be opening on June 6 at the Museum of the American Illustration in New York. Meltzoff passed away in 2006 and was a member of the Society of Animal Artists and served on the SAA’s Executive Board. 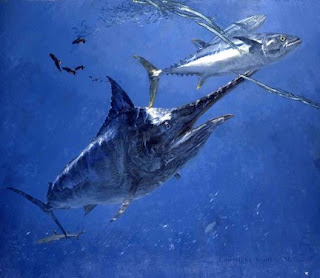 STANLEY MELTZOFF – OCEANS AND OTHER WORLDS

A comprehensive one-man show featuring the work of premier sporting artist Stanley Meltzoff (1917-2006) will open on June 6th at the Museum of American Illustration in New York.    With some 90 paintings scheduled for exhibition, this show will be the largest Meltzoff retrospective ever mounted and focus on his breathtaking renderings of the world’s apex game fish.     While many of his images have been widely reproduced over the year, these are the original pictures from the artist’s estate.  Most have never before been on public display.

Fans of fine sporting art will have no trouble recalling Stanley Meltzoff.  Born in Brooklyn in 1917, his career included four years as a Stars and Stripes newspaper correspondent during WWII, postwar teaching at the prestigious Pratt Institute of  Art in New York, and many decades as a highly successful commercial artist and  illustrator.    An early and enthusiastic SCUBA diver, Meltzoff’s career took an  abrupt turn after securing a commission from Sports Illustrated in 1960 to do a series of game fish paintings unlike anything ever done before.   His dramatic and incredibly detailed pictures of striped bass, bluefish, sailfish, and other species
proved to be breathtaking and set a high bar for other artists.  Widely published and repeatedly honored throughout his career, Meltzoff’s death in 2006 stilled a brush that will never be equaled. 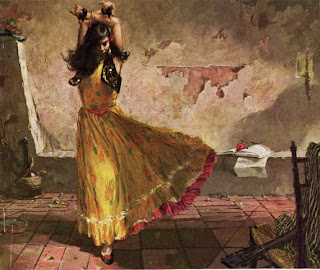 The Museum of American Illustration is located at 128th East 63rd Street in Manhattan.  It is also home to the Society of Illustrators, a venerable 111-year old
institution whose membership has included virtually every major illustrator of the
past century.   Stanley Meltzoff joined such luminaries as Frederick Remington,
Norman Rockwell, and N.C. Wyeth when he was elected to its Hall of Fame in 1999.

An opening reception for STANLEY MELTZOFF – OCEANS AND OTHER WORLDS will be held the evening of Friday, June 8th with a media breakfast to take place earlier that day.   A private reception benefitting The Billfish Foundation is planned for June 7th.   For information on attending any or all of these special events, please
contact anelle@societyillustrators.org.   The exhibition will remain to the public  until July 28th. 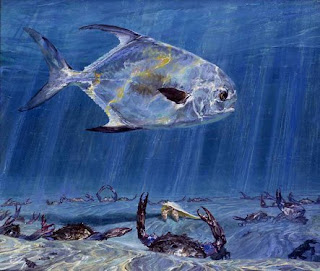