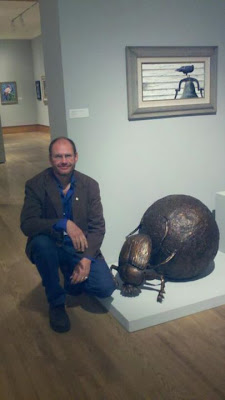 Paul's sculpture "ONE MAN'S TRASH" won The Ethology Award for Best Depiction of Natural Behavior at the 51st Art of the Animal exhibition which is going on now at The Dennos Museum Center at Northwestern Michigan College in Traverse City, Michigan.


"The Ethology Award for the Best Depiction of Natural Behavior, is an award that best represents NATURAL BEHAVIORS. It may be awarded to either 2-D or 3-D work, but the work should depict the subjects engaged in doing SOMETHING that is representational of natural behavior. For example, animals may be engaged in feeding young, courtship, a kill, or grooming – but they should be depicted performing some natural behavior which says something informative about that particular species."

The 51st Art of the Animal exhibition will be displayed though December 30, 2011