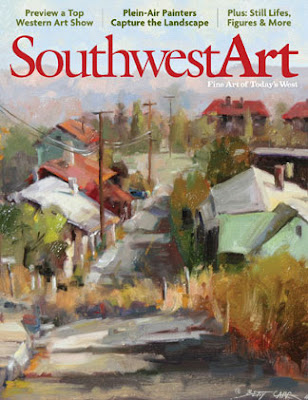 June 2010 cover of Southwest Art
SOUTHWEST ART MAGAZINE has announced that they will be sponsoring an award (possibly more than one) at the Society of Animal Artists 50th Anniversary ART AND THE ANIMAL exhibition in September. This award will be for a free ad in the magazine and will be announced at the awards banquet during the exhibition. This is a brand new award and Southwest Art has also already committed to continuing it for the 2011 exhibition. Diane Mason, president of SAA said that the magazine was so "blown away" by the quality of the work after reviewing a CD of the show that they came up with the idea for this award.