This month I'm featuring SAA members from the first decade of the Society who are still active members today. The Society has seen a lot of change over the past 60 years, and it's been interesting to take a look back in time while reading about the history and hearing stories from our longstanding members, who are truly gems! So without further ado, here are some wonderful stories and insights from these very special SAA members.

~  Doug Allen  ~
For Doug Allen, a favorite memory with the SAA was attending his first SAA meeting while being surrounded by the likes of Paul Bransom, John Clymer, Bob Lougheed, Bob Kuhn, Francis Lee Jaques, Louis Paul Jonas, and others. He remembers when artists had to submit their original artworks for the jury process.

A word of advice Doug would share with our newer SAA members, would be an adage from artist Paul Bransom  “If you can’t experience studying animals in the wild then go to your local zoo and draw, draw, draw.” Out of all the pieces Doug has exhibited with the SAA, his favorite piece was a painting done in 1985 of a bison entitled “Early Winter”. When asked what’s the biggest change he's seen in the art world since becoming an SAA member, he answered simply with, “It’s a puzzlement”. 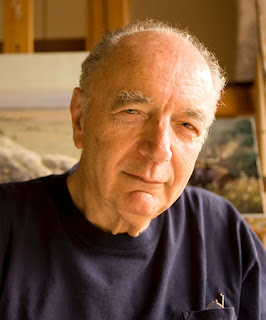 A favorite memory for Guy Coheleach with the SAA was how they used to make their chain-smoking president, Joe Vance, go out on the roof of the 6th floor to smoke his cigarettes, which was just outside where the rest of them held their monthly meetings at the Salmagundi Club. Sometimes after a particularly long meeting, they would have dinner at the Giraffe Restaurant located in mid-town. These Board members constantly showed up month after month, year after year in the sixties and seventies through all kinds of weather topped with New York commuting and traffic conditions. This was during a time when a handful of dedicated people kept a very fragile SAA from disappearing. Another fond memory for Guy associated with fellow SAA members was a fun incident that took place in the middle of the African bush when some rangers came walking up with a few books for Bob Kuhn and Guy to sign, and one of them had an SAA catalog!

Although it’s not his favorite piece, Guy's very fond of  “Siberian Chase”, an impressionistic painting of a tiger running in the snow. This painting finally freed him commercially from all of the meticulous detail he thought so necessary in years prior. Since becoming an SAA member, the biggest change Guy has seen in the art world is that too many works now look like photographs. His word of advice to our newer SAA members would be "I think if a person loves what they do and are not afraid of hard work they have to succeed.” 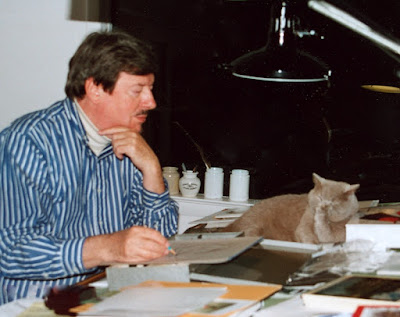 SAA member Albert Earl Gilbert was elected as First Vice President shortly after becoming an SAA member and recalls what a great experience it was meeting Paul Bransom, Doug Allen, Pat Bott, John Clymer, and so many great artists at the Salmagundi Club in New York City, during which time he made numerous lifelong friendships. In 1974, Paul Bransom asked Albert to stay after an SAA meeting, where he told him, “Gil, try not to live into your 80s and outlive all your friends as I have now done. And another thing, don’t ever get shingles, which I have now, but I’m hoping to recover from. Meanwhile, I want you to become Acting President of the SAA and take charge of all meetings until I can return.”  Albert had no ambition to do that; however, when Paul chose him, he gladly agreed.  Albert did this for several years, and Paul gradually recovered. Given his health, Paul couldn't remain as President though, so he nominated Albert to become the SAA President, which he was from 1977 to 1984.

During Albert's presidency, the SAA established the first Annual Exhibition and Convention in March 1979 at the Explorer’s Club. Explorer Club member, Guy Coheleach, arranged for the speakers to give their presentations at this famous venue. Those who spoke were Roger Tory Peterson, Robert Bateman, Guy Coheleach, and Dick LeMaster. All SAA Annual Exhibitions were held at major venues such as the Philadelphia Academy of Natural Sciences, the Cleveland Museum of Natural History, and the Blauvelt Museum of Art. He goes on to say how Guy Coheleach did so much work behind the scenes to promote the success of the SAA, and that many, many others also gave of their time and energy. Albert says that it’s hard to believe there were over 150 artists back then while recalling so many good memories, being glad he was there to participate. 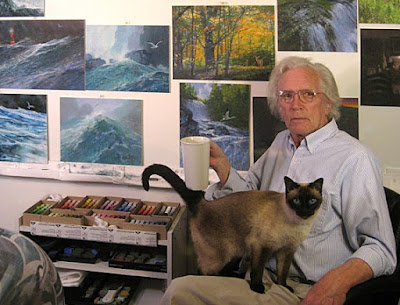 SAA member George Schelling’s favorite times with the SAA were spent at the meetings and show openings. He knew many of the members back in the 60s and recalls what great times they all had to talk about art.  He’s sure he would enjoy the same wonderful camaraderie today, but traveling is harder now that he’s older. George loves that in this digital age with the internet allowing everything to be online, he can enjoy “visiting” museums that he’d never get to see in person.


These two members were unable to respond to my questions, so I am featuring one of their paintings featured in past SAA Annual Exhibitions. The SAA is especially indebted to Nancy for recently sending our office a treasure trove of historical documents pertaining to the Society.


You too can easily Become A Patron Member of The SAA